The Poly Object gives you access to millions Admin borders and shapes, from the OpenStreetmap database.

The Poly Object requires a DEM Earth object somewhere in the parent hierarchy. Best is  to insert it under a pin, which is under your dem earth object. 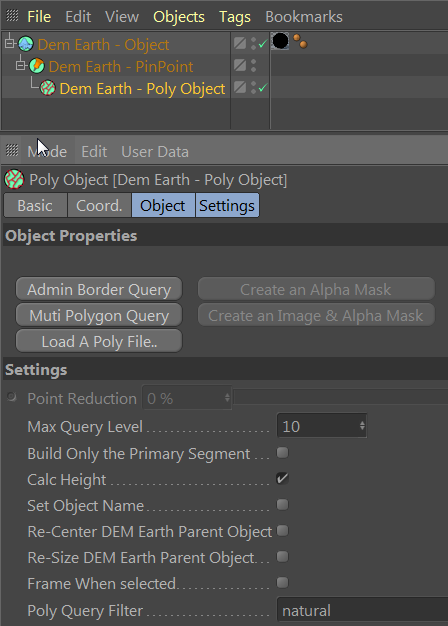 Once you have populated the object with borders,  simply click on any border button to download and show that border.  the camera will center on the new border. It may need to generate a border if none exists. This can take a few secs. once downloaded, the borders are cached and re-used if ever needed again, as are the queries you make.

This button creates an aliased alpha image, puts that image in a new material's alpha channel. it then places that material on the parent dem earth object and maps it using a georeference tag. A semi random color is used in the color channel, based on the name,level and location of the border. This gives each poly border a unique individual color and the  image mask created has a unique name.

This button creates an image from your Map loader settings, and an Alpha mask for it, from the active poly border.

Some of the admin borders have an awful lot of points... that can be a problem if you want to use extruder to polygonize, or sweep. The point reduction setting uses a very clever algorithm to reduce the number of points in the spline, with minimal visual impact. Give it a try, you will be surprised at how good this secret little feature is :)

Polygons can be made of multiple segments. This setting tells the Poly object to build only the largest, primary segment.

If this is  Enabled, the poly object calculates the physical height of each point in the spline, from the dem earth parent. Turning this off has the effect of speeding up calculation, and flatting the spline.

If Enabled, this will change the Poly Objects name, to the name of the border you select.

An additional filter name for the Multi Polygon Query command. As per OSM query language. This is useful for example, if you want to find specific things that are not an admin border, but are a Multi Polygon shape. i.e. lakes o rivers.

Sometimes an admin border can have lines, with just a few points, that cover a large distance. You might want additional points to be added. This is how you can do that.